The Rohingyas in Rakhine, Myanmar

Singapore Malay National Organisation (PKMS) are concern with the current state of affair and the ongoing human rights violations against the Rohingyas in Rakhine, Myanmar. The persecuted Rohingya minority faced increased violence, discrimination and with the recent fighting between the army and ethnic armed groups that escalated in northern Myanmar has further intensified humanitarian intolerance.

It’s to the best interest of Myanmar government to act swiftly and intervene in resolving the above mention issue. Peace and stability are key fundamental towards economic progress of a country especially for the case in Myanmar which has so much to offer but this can only happen within a stable, peaceful and strong governance in a country.

We believe Myanmar government is doing all it could in resolving the issues but with the whole world centring their concern on the displacement of the Rohingya, time is not on Myanmar government side. The longer this situation remains, it could be of a costly significance to Myanmar standing both globally and in ASEAN.

We seek Myanmar government to act fairly and decisively especially in recognizing the Rohingya who had been living in Rakhine, Myanmar for many years. The human rights violations need to stop. 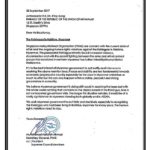